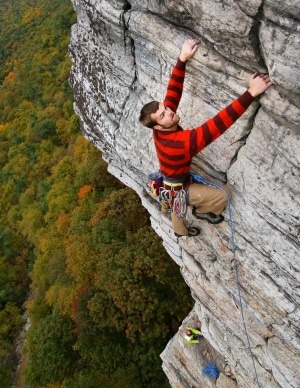 Dustin Portzline has been climbing since 2005, and would make frequent road trips to the Gunks from his home in Harrisburg, Pennsylvania. Eventually, in 2010 he moved to New Paltz and which positioned him close to the cliff for plenty of time climbing and exploring. He has fallen in love with the many intimate corners of the Shawangunk Ridge, and has a hard time imagining running out of new experiences.

In 2009 he earned a degree in Environmental Studies from Pennsylvania State University. A certified AMGA Rock Instructor, he has been guiding for New Paltz based Mountain Skills Climbing Guides since 2010. He is licensed in New York State for Rock and Ice Climbing, as well as Hiking and Boating. He has been a member of the Access Fund and American Alpine Club since 2007, and is a Leave No Trace trainer.

Dustin joined the Gunks Climbers’ Coalition because of the energy and momentum he felt at meetings. His interest in access to private cliffs and maintenance of fixed anchors on the Mohonk Preserve has fueled his belief in the collective effort of the GCC to make climbing in the Gunks a safe and freeing experience. He lives in a tiny purple cabin with his girlfriend Amelia. Between climbing sessions he keeps chickens and a large garden, and practices banjo.