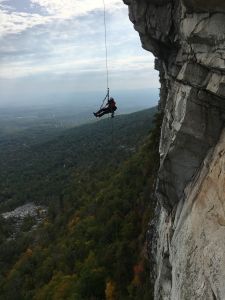 In between assignments and climbing trips photographer/director Chris Vultaggio calls the Gunks home.

His adventure photography and writing has been featured by National Geographic online, Rock and Ice, been on the covers of both Alpinist and Climbing magazine, and maintains a global base of Fortune 500 clients including BMW, Anheuser Busch inBev, and major financial institutions. Chris has worked in over 40 countries and calls JFK airport his second home.

As a climber/alpinist Chris has spent time climbing in the Nepalese Himalaya, the Alps, Alaska, British Columbia, the Norwegian Arctic Circle, the Middle East, the American Southwest, the Sierra, and across the Northeast.

Chris is a Mountainsmith athlete and supported by Patagonia, Petzl, BAM Bamboo Clothing, Evolv, and Ibex.

His film work has focused on Bears Ears, the Access Fund, and most recently completed a Patagonia-backed conservation film with the Gunks as a backdrop. On the side Chris is a volunteer EMT for Gardiner Fire Department.