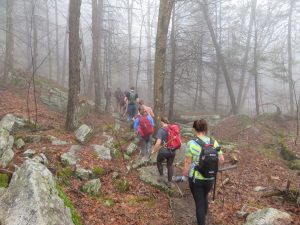 Walking through the fog along Undercliff carriage road toward Sleepy Hollow at the far northern end of the Trapps, the combined stewardship crews from the Gunks Climbers Coalition and the SUNY New Paltz Outing Club chatted climbing as we looked up toward the cliff mostly visible through the damp air and and still unbudded trees.  After a preliminary recon with Mohonk Preserve ranger Dan Cassidy a few days prior, we were there to improve the trails and deal with the considerable amount of dead hemlock debris along the base of the cliff from Casa Emilio to Wegetables.

As one approaches the S-curve in Undercliff road from the south, there are two trails up into Sleepy Hollow.  The first one is blazed yellow, but unfortunately starts out from the carriage road up a steep little, muddy bank — improving and stabilizing this little section with stone steps is in future plans.  That trail wends its way up through the talus toward Casa Emilio.

The second trail is currently unblazed but is hard to miss right where the road begins to curve.  It’s here we began the work.  The trail used to take you kind of down and to the right as it skirted a somewhat seasonal pond/stream, but always very wet area, stepping on deep humus, moss-bedded rocks, and exposed tree roots until it curved up and left to the base of Wegetables.  Going through a very sensitive ecological area, it was determined by the Mohonk Preserve and the GCC that the small benefit this trail represented to climbers was far outweighed by the cost trampling foot-traffic imposed on the unique landscape.  This old trail has been lightly “brushed off” at the lower end and heavily brushed off (ie, blocked with logs and limbs and brush) at the higher end.  Please take the hint and don’t use this trail anymore.

Because now there is a new trail.  It shares its start off the carriage road with the old trail, but within a few yards breaks up and left.  Immediately to the left is the huge and now very popular Sleepy Hollow Boulder (it may have other names, as well), with its large number of bouldering problems.  The new, currently unblazed but very visible path breaks off up and slightly right from there and within a hundred yards brings you to the cliff between Thom’s Thumb Pinnacle and Dick’s Prick Pinnacle.  From there you can follow the path along the base of the cliff left toward Casa Emilio or right toward Wegetables.

Part of our crew set to improving this new trail and several sets of simple, stone steps were installed to make the going clearer and safer.  But the bulk of the crew, handsaws and loppers in hand, set to dealing with the many dead hemlocks along the base of the cliff.

Not too many years ago, Sleepy Hollow was wonderfully shaded and scented by the many hemlocks that thrived in this oftentimes damp section of cliff.  But then came along the Hemlock Woolly Adelgid, an invasive insect that is taking out hemlock trees at an alarming rate up and down the east coast.  At this point, most if not practically all the hemlocks right along the base of the cliff are dead and decomposing skeletons dropping limbs and debris that make accessing the trail and climbs unecessarily hazardous and difficult.  We cut up and removed countless fallen limbs as well as dropped a good number of small (for hemlocks) stumps and dead trees, that were in turn cut up and tossed away from the cliff.  Several larger trunks were left for rangers with chainsaws to take care of.  Most of the work was done from around Art’s Route north to the Wegetables wall with a little attention paid on towards A Long Walk For Man.  There’s still a good amount more work to do south from Art’s Route to around Casa Emilio.

For those who have climbed in this area over the past few years, the results of our efforts will be immediately apparent — no more rotted and looming trees dropping limbs on the trail or blocking access to climbs as they encroached on the routes behind them.  It has a newly airy and sunny feel to it.  And again, please use the new trail to access Wegetables and other climbs at the far end of the cliff — we plan on improving the trail along the cliff in places where it is rather steep, but this will always remain a relatively “rough”  and undisturbed area compared to the rest of the Trapps.

For those who have never checked out Sleepy Hollow, take the opportunity of the falcon closure to visit and climb in this beautiful area.  It’s almost a twenty minute walk there from the Stairmaster, but it’s hard to argue that the approach isn’t more than worth it.

After the work was done, there was some fun TRing on the Ken’s Crack wall in what turned out to be a gorgeous spring day.  This was part of an outreach effort on the part of individual members of the GCC to help individual SUNY Outing Club members who want to learn to climb get more time outdoors on real rock.  The idea, too, is for experienced climbers to mentor less experienced individuals who really want to learn to follow and lead — just the way it’s always been done.  Even though SUNY New Paltz is near the Gunks, and bouldering is increasingly popular, it’s still pretty difficult for students to find ways to rope up without hiring a guide and to meet people and build relationships in the local climbing community.  Judging from the day at Sleepy Hollow and Ken’s Crack, we have every reason to believe a fruitful relationship between us and the students has just been set in motion.