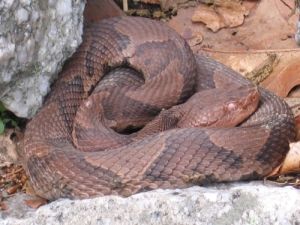 While climbing or hiking (or even swimming!) in the Gunks, there’s a good chance you’ll eventually run into a snake. We hope this will help you identify common snakes in the area and know which ones are poisonous.

These snakes may bite if threatened, and while these snakes are not venomous, they can cause localized irritation or other more serious conditions and there is always the risk of infection. If you are bitten, it would be wise to seek medical attention. 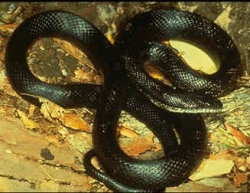 Black rat snakes live in habitats ranging from a rocky hillside to flat farmland and are the most common snakes in the Shawangunks. You may see them in sunny spots near the carriage roads. They are also amazing climbers and can scoot up trees or climb the cliffs better than you! They’ve been spotted high up on climbs hanging out of horizontal cracks. Luckily, if you ignore them and climb around them, they will probably leave you alone. The Black rat snake can reach up to 8 feet in length and is generally shiny black except for a white chin. They are constrictors, suffocating their prey by coiling around them and tightening their grip before eating them. 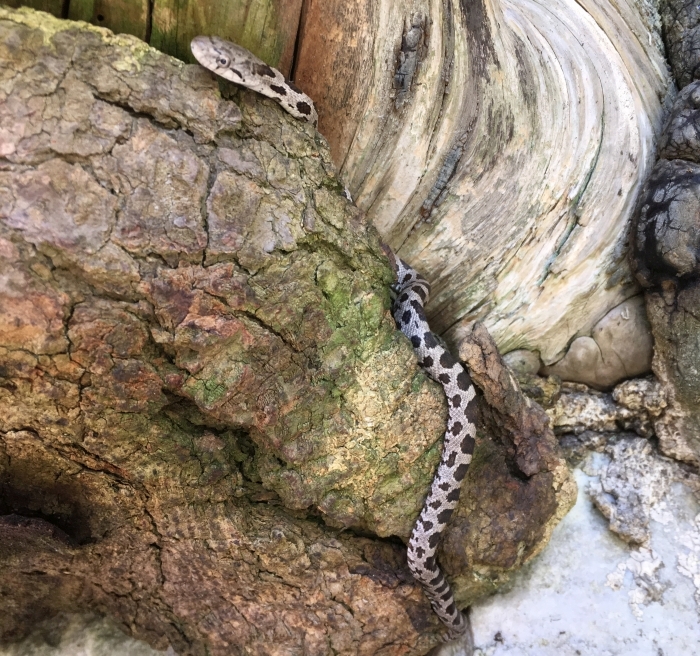 Baby rat snakes may still have patterns, which will fade as they mature and grow blacker in color.

Black Rat Snakes are non-venomous and harmless. They are relatively slow moving and will most often freeze when first encountering danger. This is why so many are seen as roadkill. However, while Black Rat Snakes are usually non-aggressive, they may strike at anyone who tries to capture or harm them. If cornered, they may attempt to mimic rattlesnakes’ behavior by vibrating the tip of their tail, giving a buzzing low-pitch sound.

Here’s a video of GCC Board Member, Matt Logan, picking up a black rat snake. Deservedly, it peed on him. 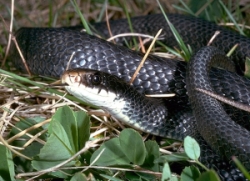 The Northern Black Racer is 34 – 77 inches long. They are slate black and have a darker black upper lip. The chin tends to be white. The bellies tend to be white, yellow or dark gray. Racers are fast moving, highly active, diurnal snakes. Typically they prefer to make use of their speed to flee when confronted by a potential predator, and if handled they generally do not hesitate to bite, and sometimes release a foul smelling musk. They are curious snakes with excellent vision, and are sometimes seen raising their head above the height of the grass they are crawling in to view what is around them. 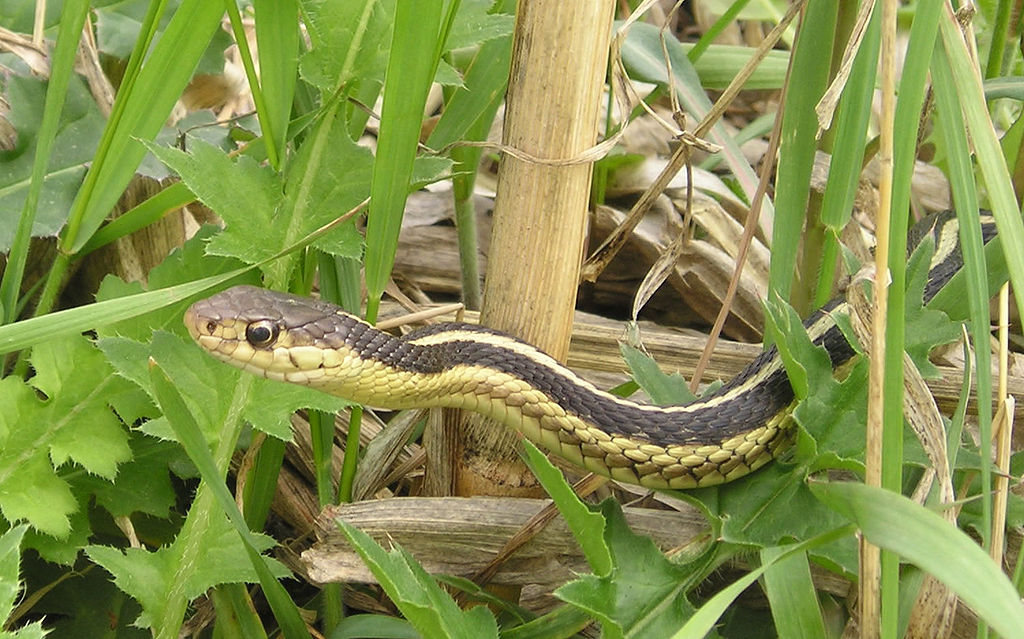 Garter snakes are very common. Most garter snakes are 2-3.5 feet long, and have a pattern of yellow stripes on a brown background. Garter snakes occupy a variety of habitats including pond and stream edges, wetlands, forests, fields, rocky hillsides and residential areas. They are often observed as they bask on rocks, wood piles, stone walls, hedges and swimming pool decks. Although garter snakes may or may not bite if handled, most individuals secrete a foul-smelling fluid from anal glands when alarmed. Their saliva appears to be toxic to amphibians and other small animals and a bite may produce swelling or a burning rash in some people. 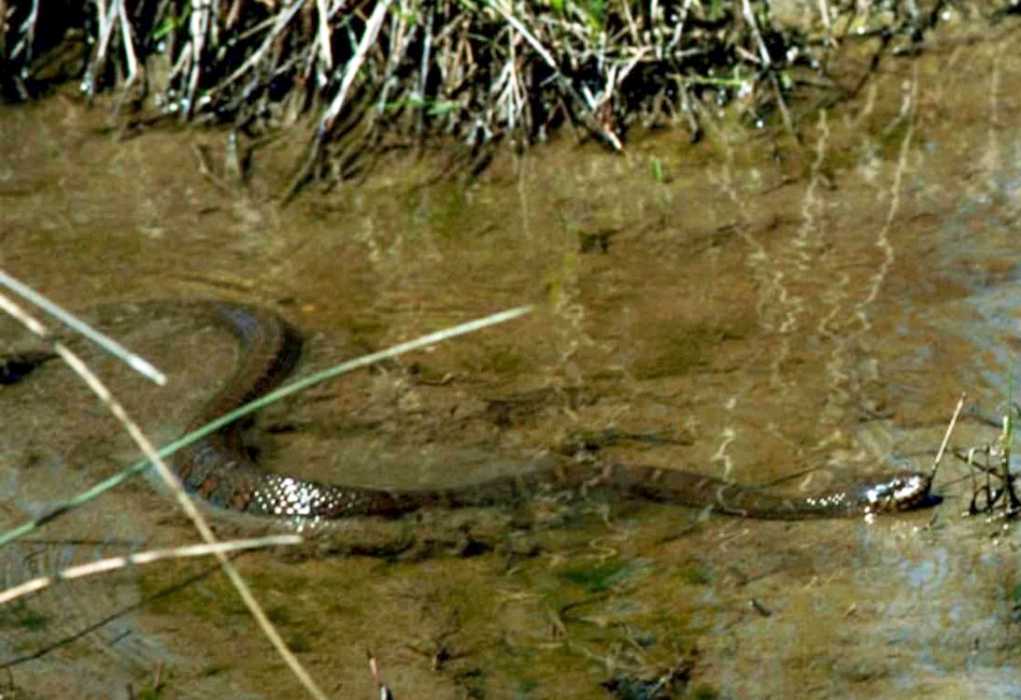 Northern Water Snakes grow over four feet long. They can be brown, gray, reddish, or brownish-black, with dark crossbands on their necks and dark blotches on the rest of their bodies, and tend to darken as they age. Some will become almost completely black. The belly of this snake also varies in color. It can be white, yellow, or gray. Usually it also has reddish or black crescents. Northern Water Snakes are often misidentified as timber rattlesnakes or copperheads by novices. They are almost always found in or adjacent to water, preferring slowly flowing water, but they can easily swim and maneuver in strong currents. You may find one at the Split Rock swimming hole. When they are threatened, they defend themselves vigorously. If they are picked up by an animal, or person, they will bite, as well as release excrement and musk. Their saliva contains an anticoagulant which can cause its wounds caused by biting to bleed profusely. Best to leave these guys alone.

The eastern milk snake looks like so many other snakes and even imitates their behavior that it’s easy to be fooled. They average 24 to 36 inches in length, with a slender body. Its head is only slightly wider than its neck. Coloration varies greatly, with narrow bands of white and black alternated with brownish or reddish brown saddles. They have an irregular black and white checked belly. Milk snakes will try to avoid people, and will coil, hiss, strike and bite if cornered and frightened. They will also vibrate their tails to produce a buzzing sound, imitating a rattlesnake but without the rattle. However, they are not venomous. Eastern milksnakes can be found in forests as well as in human-altered areas, usually under the cover of logs, stones, boards, or stone walls. During the heat of summer, they may become nocturnal. 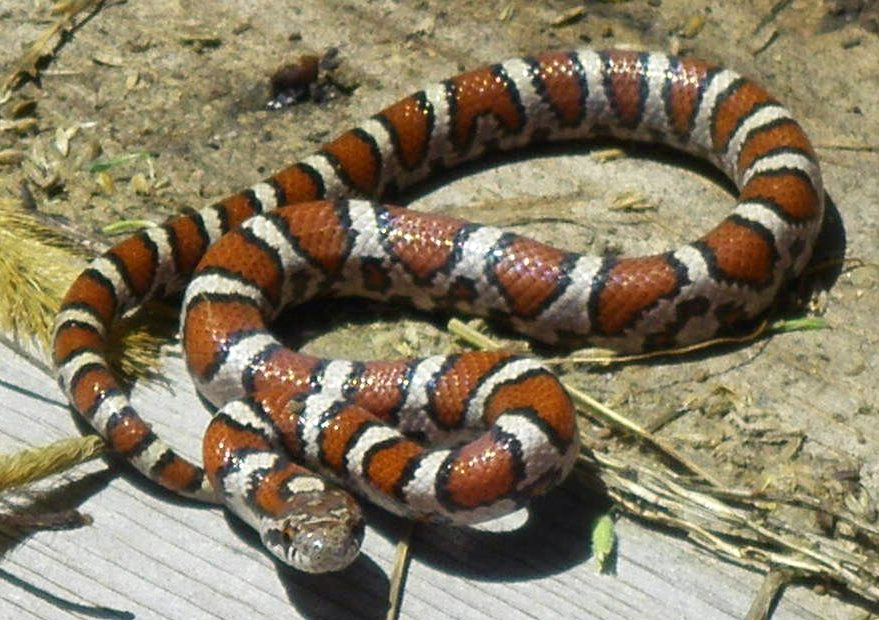 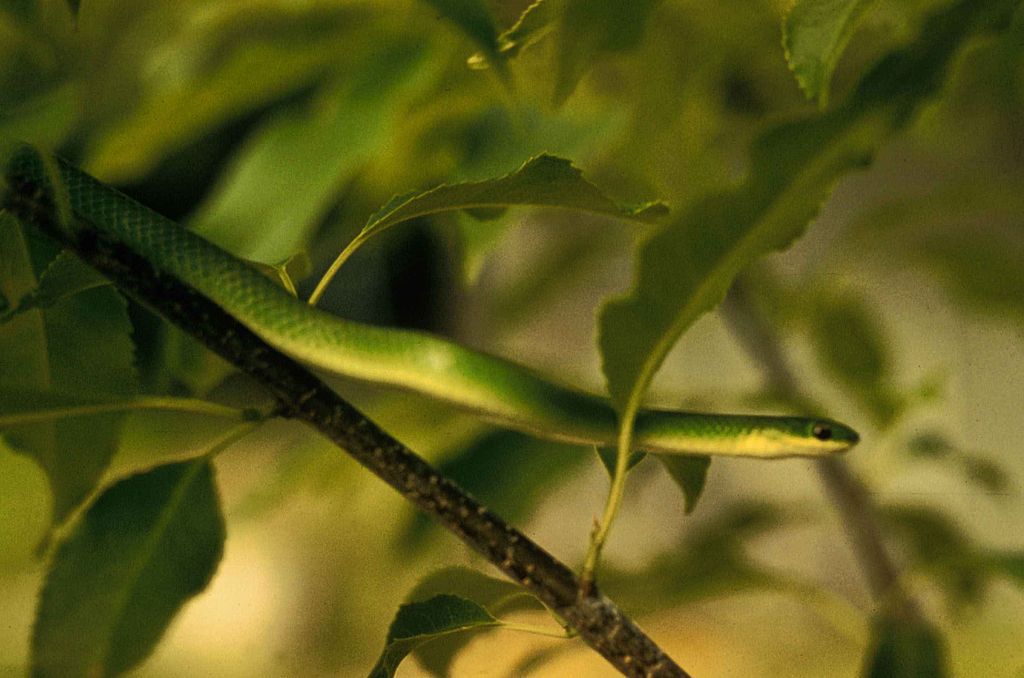 The smooth greensnake, also known as the grass snake, is a small slender snake (14-20 inches) with a beautiful bright green color. It is less commonly seen around the Gunks, but has been spotted at the base of the cliffs. It seldom bites and is usually shy and flees when threatened.

Here at the Shawangunks, snakes are often well camouflaged in fallen leaves between boulders. Be very careful when scrambling up talus trails. Venomous snakebites are rarely fatal among healthy adults, but if you are bitten, you should seek immediate medical attention. Rattlesnake venom antidote is very expensive and could be financially “fatal” if you don’t have health insurance! 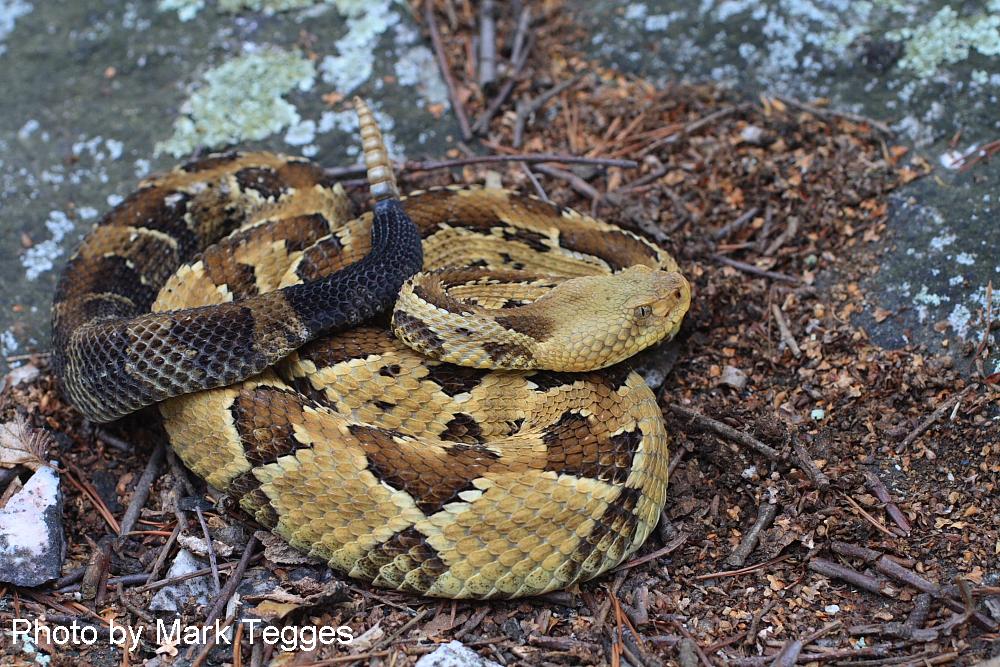 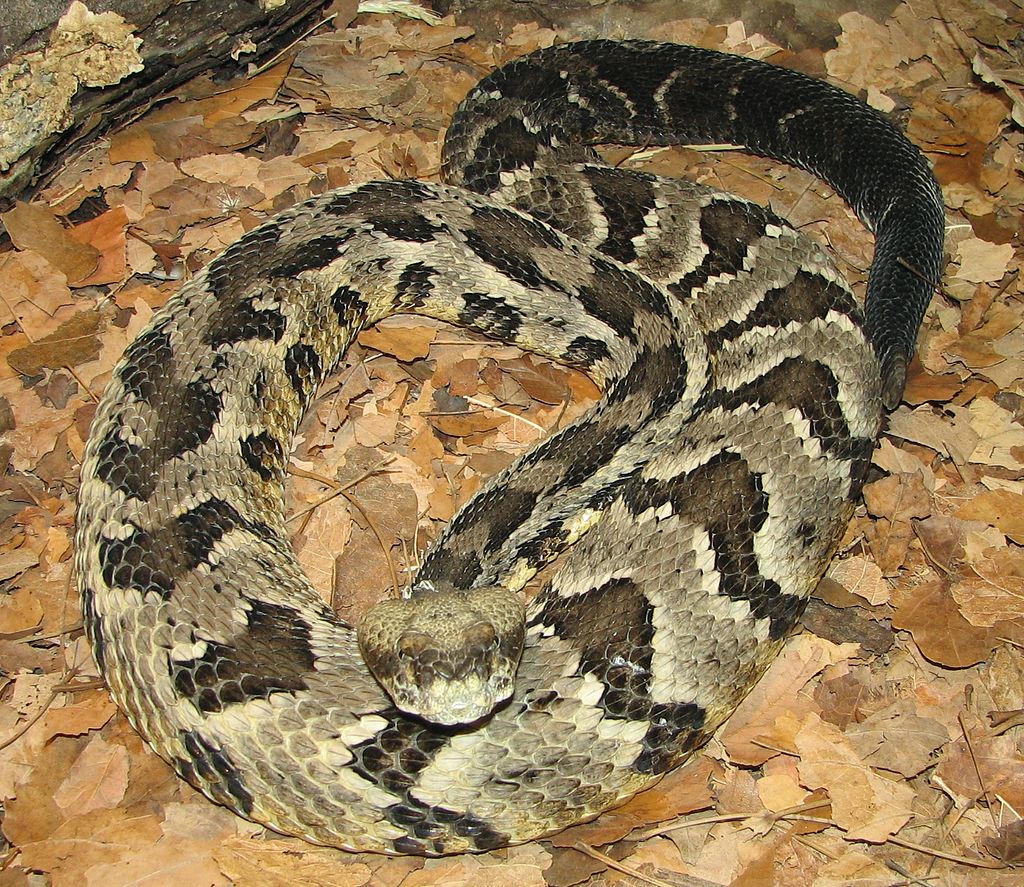 This poisonous pit viper is more dangerous than the Northern Copperhead – actually one of North America’s most dangerous snakes, due to its long fangs, impressive size and high venom yield. Fortunately, they have a relatively mild disposition — a rattlesnake will not pursue or attack a person unless threatened or provoked. Before striking, they often do a good deal of preliminary rattling and posturing. The venom, which is used primarily to immobilize prey, can be fatal to humans if the bite is untreated, however human fatalities are very rare. The Timber Rattlesnake is approximately 3 to 4 1/2 feet long, and its body color may be yellow, gray, dark brown or black. Along with its sheer size and characteristic rattle, this snake can be readily identified by the presence of dark bands, or chevrons, running across its back. The head is usually unpatterned and is covered with many small scales. 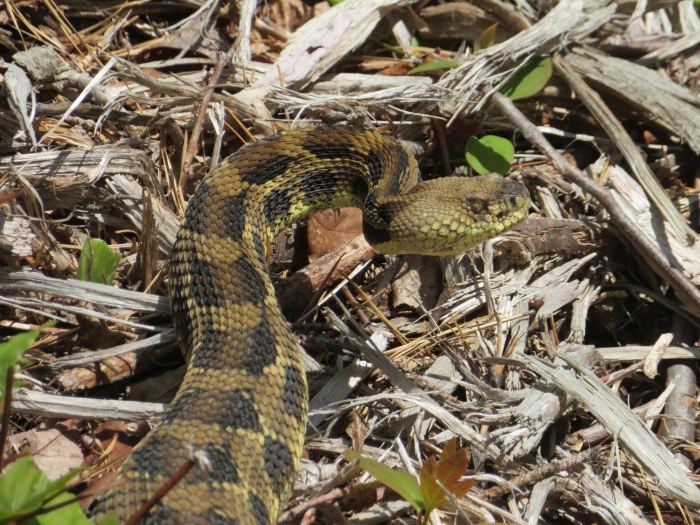 Timber Rattlesnake, spotted on the Shawangunk Ridge in the western part of Minnewaska State Park.

In New York State, they are on the threatened species list. Factors such as development, illegal collecting, and the continual disturbance of forests by recreational users will likely prevent or hinder population recovery for many areas.

Young copperhead snake at base of climb.

Copperheads are potentially dangerous venomous pit viper snakes. The copperhead can be told by its coppery-red head and by the distinct bands along its body which are widest at the sides and narrowest across the back. They are moderately sized snakes, with adults normally reaching 2–4 feet, with thick, heavy bodies, although the body is more slender than most other pit vipers. They prefer to avoid humans and, given the opportunity, will leave the area without biting. However, they will often “freeze” instead of slithering away, and as a result many bites occur from people unknowingly stepping on or near them, especially because of the extreme effectiveness of their camouflage. When lying on dead leaves they can be almost impossible to notice. They will frequently stay still even when approached closely, and will generally strike only if physical contact is made. 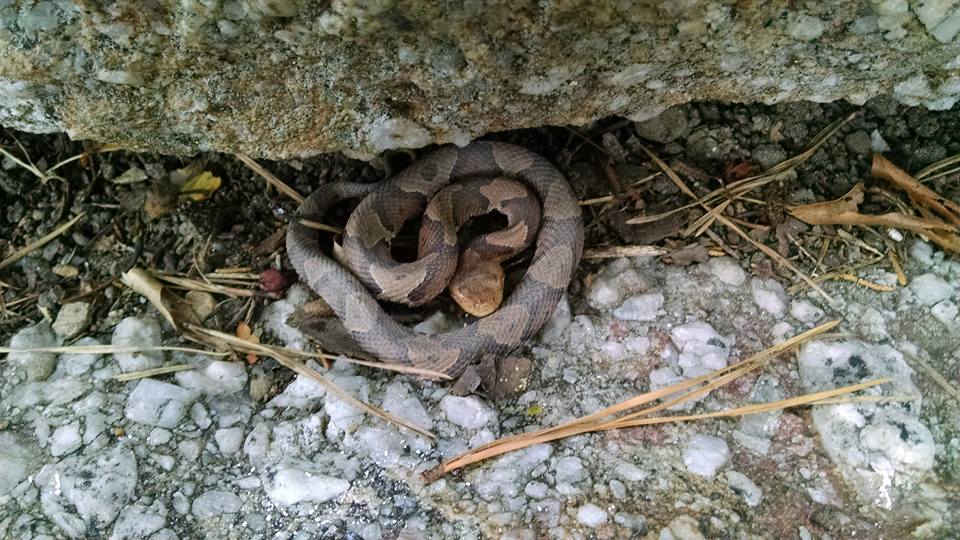 Although venomous, these snakes are generally non-aggressive and bites are almost never fatal. Bite symptoms include intense pain, tingling, throbbing, swelling, and severe nausea. Damage can occur to muscle and bone tissue, especially when the bite occurs in the outer extremities such as the hands and feet, areas in which there is not a large muscle mass to absorb the venom. A bite from any venomous snake should be taken very seriously and immediate medical attention sought. 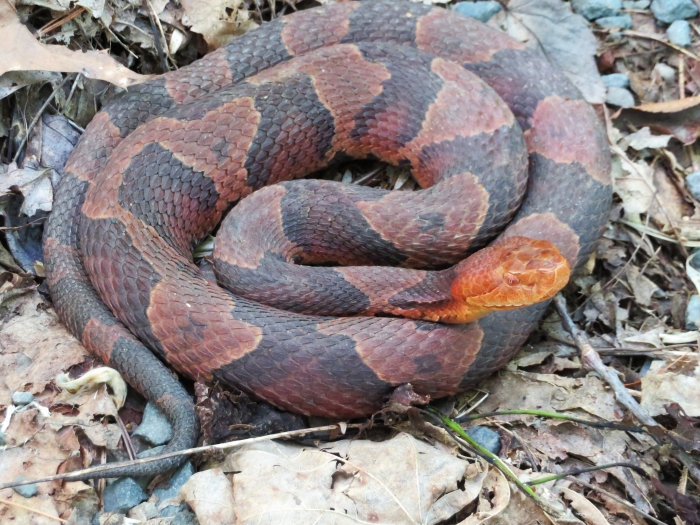 Can you see the copperhead in the rocks below? This photo was taken a few years ago along the Near Trapps trail just in front of the climb Gelsa. 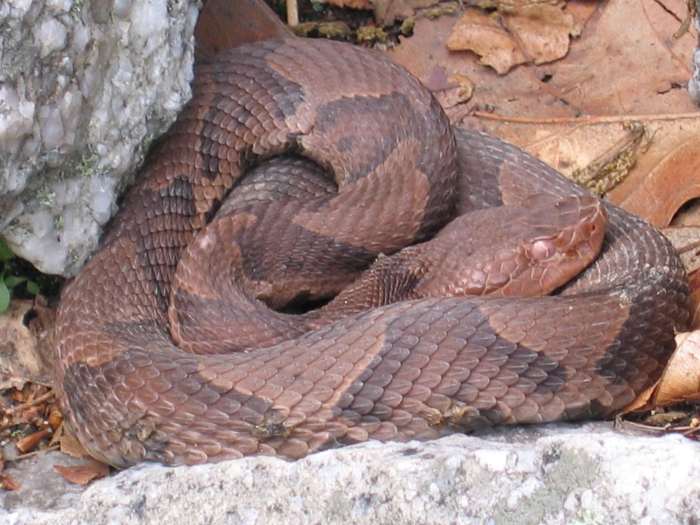 Close up of Copperhead hiding in the rocks. 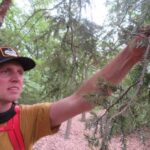 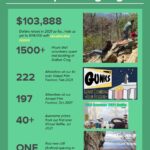 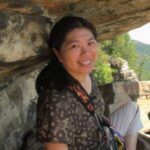 GCC Profile: Jannette Wing Pazer—Climbing Mom and GCC Board Member for a Lifetime