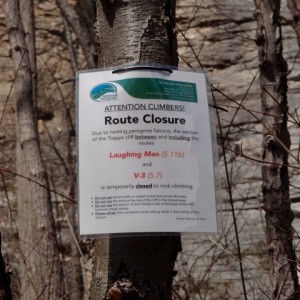 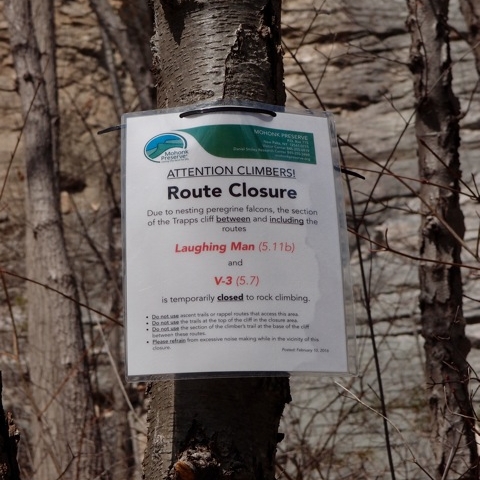 With the Trapps Peregrine Falcon climbing-closures becoming more extensive lately, we thought it would be interesting to explore the reasoning behind this conservation restriction by the cliff’s wildlife stewards at the Mohonk Preserve. In the spring of 2016, we took a walk with the Preserve’s new Director of Conservation Science, Dr Elizabeth Long who is, we should note, a trad climber herself. We walked down Undercliff Road to the Madame G’s buttress where the presumptive Peregrine pair could easily be seen coming-and-going from their preferred perch right top and center of the buttress. We even got to see the pair mate — a quite hurried affair atop the rock with the male (called the tiercel) doing all the flurrying and making all the noise before flying off again. The female (called simply the falcon), was, to our binoculared eyes, left less than shattered by the experience. 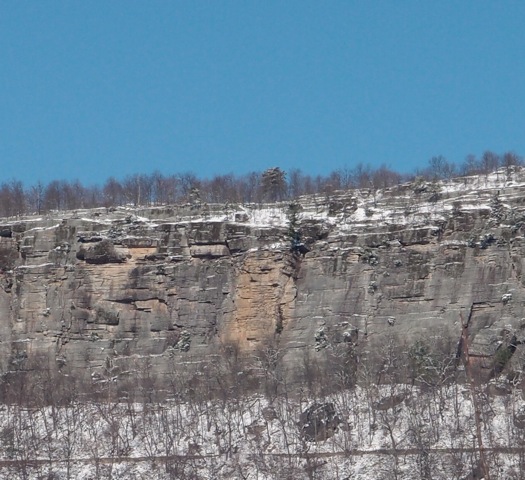 Looking up at the Madame G’s buttress in the Trapps, the area where the Peregrine Falcons are nesting in 2016.

Why Such an Extensive Cliff Closure at the Gunks?

Once looked at from the perspective of the birds atop Madame G’s the reasoning behind the large closure makes perfect sense — it’s to provide human-free sightlines on either side of the buttress. Peregrines return to the same area year after year and this pair favors positioning their nesting sight in one of the horizontal slot-ledges up around the Hawk and Peregrine climbing routes. In seasons past it’d been thought that a climbing closure protecting this area to the south of Madame G’s was sufficient to ensure a feeling of well-being for the birds. But because they spend so much time right atop Madame G’s, the revised thinking is that if they look down to the north and see climbers all over the Guide’s Wall they can’t feel overly assured that there isn’t a worrisome threat there. Hopefully this more sensitive closure will result in less stressed birds and therefore a more successful nesting season. 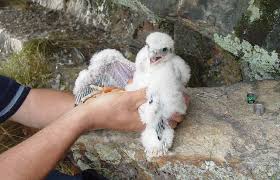 As of April 1, 2016,  the Preserve biologists believe the three nesting pairs along the ridge on Millbrook Mountain, the Trapps and Bonticou Crag have all successfully mated, chosen nesting sights and lain their eggs. And Peregrines do like their personal space — a comfortable mile between nesting sites, which is why even if and when the species is fully recovered they’ll still be a fairly rare bird in any given area. Typically the rest of the season will play out like this: The three to five lain eggs are now being incubated at the nesting sites, which is not much of a nest, just a shallowed out area in a ledge’s sand and pebbles called a scrape. The incubating is done mostly by the female but at times during the day the male will take turns. Beyond incubating the eggs, the mating pair must also defend the nest against predators — rodents and Great Horned Owls or, it’s thought in the case of the Bonticou pair, from raccoons or foxes due to the particularly poor siting of that nest. At the end of April two to three eyases (chicks) will hatch and a noticeable uptick in activity will occur as the parents work to feed themselves and feed and defend their offspring. Then about mid-June, one to two eyases will fledge. They’ll then remain in the immediate area of the nest still dependent on their parents while learning to hunt and fend for themselves until the end of July. After that they’re on their own and if one of the two survives to the following spring that’s considered successful. After that Peregrines can live up to fifteen years with about a quarter of any given population succumbing to mortality each of those years. 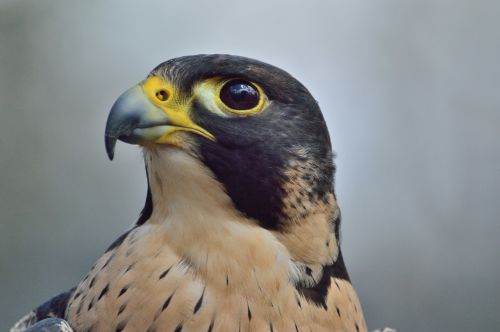 So hopefully all goes well for our Peregrine friends this season and we won’t be able to climb in the closure area until early August. As Jon Ross (Associate Director of Visitor Services for the Mohonk Preserve and former Gunks climbing guide) only half-joked to me, “The ridge is a falcon preserve that allows climbing, not a climbing preserve that allows falcons.”