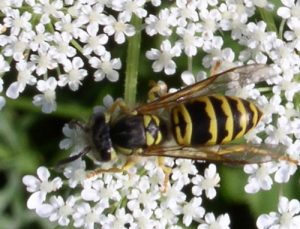 It’s high summertime in the Gunks and from now through the fall climbing season it’s also time to watch out for ground-nesting Yellowjacket (or Yellow Jacket) wasps at the base of climbs. We were out last weekend and kept a close eye on a nest under a rock at the base of Yum Yum Yab Yum in the Nears. This very popular climb often has lots of folks hanging out at the base either belaying their lead climber or queuing up party after party for their turn. Figuring this was a not-if-but-when situation for a wasp attack, which can be dangerous both for the people on the ground and anyone they’re belaying above, I asked a climbing guide and Mohonk Preserve Ranger (with personal experience with the business ends of wasps) if a warning sign might not be prudent. His answer, in short, was that because of the dry, hot summer we had prior to the rains there are way too many Yellowjacket nests along the base of the cliffs to put signs up for — warnings would be everywhere so a general awareness of the danger is really what’s in order. 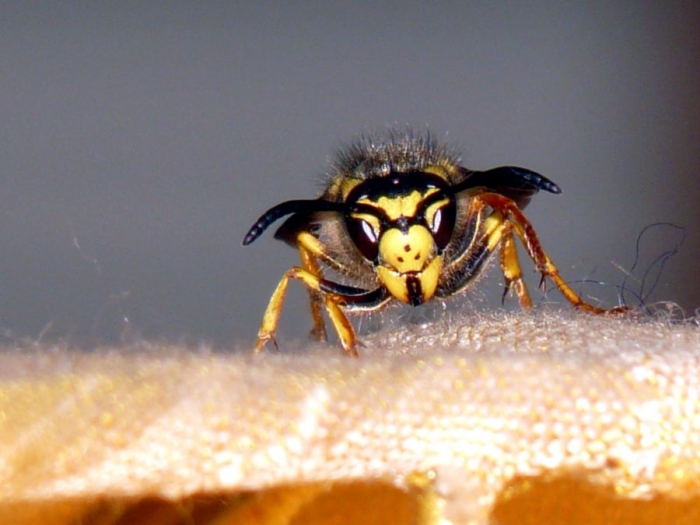 So…when getting to the base of a climb (or anywhere you’re going to linger, throwing down your pack, tying up your crag dog, relieving yourself among the talus and trees, etc) stand still, look around for flying insect movement and if you spot a Yellowjacket or two look to see if they’re landing and crawling into a hole in the ground — then watch that spot to really identify where the opening to the nest is. Give the nest as wide a berth as you personally feel is prudent. Up on the cliffs themselves, you might encounter Yellowjackets nesting on the GT Ledge, for example, where there’s deep enough dirt to create a nest. Otherwise, up on the rock, the more typical danger are the wasps with their small, globular, paper nests attached under ledges or in cracks. 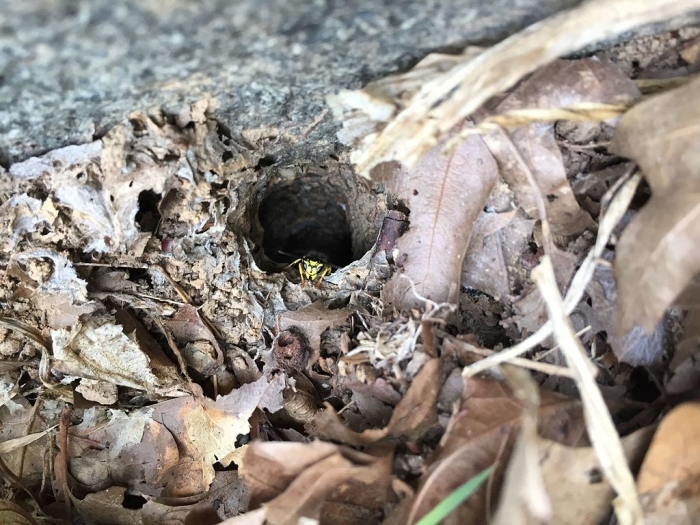 In my experience, Yellowjackets pretty much stick to their business while people are in the immediate proximity to their nest. But if the nest is disturbed (a jolt to the ground around the nest opening, for example) their business very quickly becomes to defend the nest and that’s where the stings and the yelling and the running starts — unless you’re belaying a leader or top-roper and then you can’t run. So you’re stuck getting stung until the leader can make him/herself safely anchored above or the top-roper can be safely brought down to join you, which is really bad even if you and anyone around you aren’t allergic to the stings.

If you are allergic (or don’t know if you or anyone in your party are), it’s certainly more than a good idea to carry an EpiPen along with you.

So develop the habit of being situationally aware of the insect life around you and if Yellowjackets seem problematic, leave them and their home alone and move on to another climb. And please give other climbers a heads-up if you see them eyeing an area you just spotted as a nesting ground.